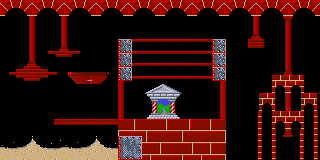 Quote: "That's a good level" is the first level of the Crazy difficulty, featured in Oh No! More Lemmings. Unlike the jump from Fun to Tricky in the original Lemmings, the jump from Tame to Crazy has a much higher difficulty spike.

This method is trickier to execute, but lets you beat the level much faster.

This one is very similar to the first one, so I'm going to skip a few steps.

Note that these access codes are of little use as this level can be accessed from the main menu by setting the difficulty to Crazy.

Retrieved from "https://lemmings.fandom.com/wiki/Quote:_%22That%27s_a_good_level%22?oldid=11173"
Community content is available under CC-BY-SA unless otherwise noted.