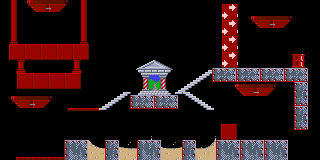 Oh No! It's the 4TH DIMENSION! is the fourth level of Wicked, featured in Oh No! More Lemmings.

This is the fourth Wicked level and there are four entrances. However, the number of losses allowed means that you can completely ignore the lower left entrance.

First have a lemming from the lower right entrance build up to the steel to stop the others from walking off the map. Once that's accomplished, start build left towards the unfinished stairs (one or two lemmings may walk into the quicksand before the ramp is finished but again, you are allowed quite a few losses.

If you can't stand seeing the lemmings from the lower left entrance fall to their deaths, Youtuber A Tactician from the Plains has shown there are enough resources to save 96% of the lemmings.

Turn the second, third and fourth lemmings from the lower left entrance into Builders to slow them down. The initial Climber will not make it from the last steel block to the red block with just one Builder skill, so let it drop down onto the metal ledge so that it can climb up the red block. The next lemming in line must complete the ramp for him, which will cause him to turn back left, so make it build under one of the previous ramps to turn him back to the right.

By this point, there should be two Builder skills remaining, enough for one lemming from the upper left entrance to get over the exit and the small gap in the stairs in order to reach the one-way wall and bash though it to release lemmings from the upper right entrance. https://www.youtube.com/watch?v=Gv0odiG5xlA

Retrieved from "https://lemmings.fandom.com/wiki/Oh_No!_It%27s_the_4TH_DIMENSION!?oldid=11236"
Community content is available under CC-BY-SA unless otherwise noted.