Lemmings is the first game in the Lemmings series. Developed by DMA Design, and published by Psygnosis in 1991, the game has been featured on Amiga, PC systems, Playstation 2 and many more consoles. Later in the same year a level expansion pack known as Oh No! More Lemmings was released.

Lemmings introduced the eight skills used by most Lemmings games. These skills were the Climber, the Floater, the Bomber, the Blocker, the Builder, the Basher, the Miner, and the Digger.

The levels are grouped into four categories on most platforms:

On the Sega Genesis version there are two additional difficulties:

The two-player option was inspired by then-current games Populous and Stunt Car Racer. DMA Design initially wanted to use a null-modem connection between two machines to allow competitive play, but ended up using the ability of the Amiga to have two mouse pointer devices usable at the same time and thus created the split-screen mode.

Music was originally created by Brian Johnston (Scott's younger brother), who sampled bits of copyrighted music. This had been common practice, but at that point there was a growing awareness of music copyright. Psygnosis asked Tim Wright to replace the offending tracks, who often used arrangements and reworkings of classical and traditional music to avoid copyright problems.

There are 21 tracks in Lemmings, which are played in the following order (in the Amiga, SNES and Mac versions):

There are four more for special levels:

The Amiga version also had an original theme song that played upon booting up the game, known as March of the Mods. In the Sega Genesis, MS-DOS, and Windows 95 versions, the order listed above is not followed.

The Acorn Archimedes version added a bonus track in the 13th spot, which is a remix of the theme from the 1990's game Mad Professor Mariarti.

The "droopy-nosed" design of the lemmings was inspired from UK children's books The Wombles, created by Elizabeth Beresford.

The Complete History of Lemmings is an article written by Mike Dailly, one of the developers.

The Atari Lynx version, due to the smaller screen size, has modified versions of all the levels with a reduced height.

The ZX Spectrum version has 60 levels, but contains none of the traps or hazards, other than water, from the other versions of the game. It also has a couple of unique levels. Due to the hardware limitations, each level is a single colour, including the Lemmings themselves, which can make it difficult to see what is going on.

The DOS, Amiga, and Mac versions all use the same password scheme. Passwords for any one of these can be used for the same level in all. 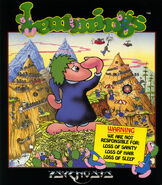 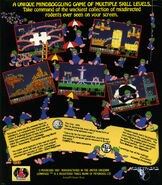 Rescuing 0% on the Amiga

Rescuing the exact % needed on the Amiga.

Rescuing above the % needed on the Amiga.

Rescuing 100% on the Amiga
Add a photo to this gallery

Since the original lemmings game, many clones have been made.

By far the most widely used at the moment is NeoLemmix, a currently-maintained open source engine with ongoing support, an active community on the Lemmings Forums, and plenty of custom content made using its dedicated NeoLemmix Editor. It also features a plethora of player-assist tools which give the user full control over the game, allowing for more focus on the puzzle aspect of Lemmings.

Another clone engine, called SuperLemmini (a fork of the original Lemmini), is a faithful recreation of the experience of playing the game on the Amiga, but with higher resolution graphics, the ability to play custom levels, and more modern gameplay features such as direction-select and resume-from-replay.

There is also Lix, another actively-maintained open source clone which has a built-in editor and 2-Player support. The gameplay is more similar to that of Lemmings 2: The Tribes. The community on the Lemmings Forums also widely plays this version.

Older versions are Lemmix, Lemmini, and Tundra, and L++, and there are more listed on The Lemmings Archive, although some of these are no longer actively maintained.

The level editor the original developers used is still around on a floppy disk owned by one of the developers, although they cannot get their computer to read the disk, so there is currently no level editor for the Amiga version of Lemmings.

Retrieved from "https://lemmings.fandom.com/wiki/Lemmings?oldid=13634"
Community content is available under CC-BY-SA unless otherwise noted.