From The Boundary Line 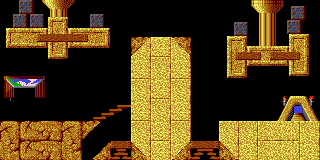 From The Boundary Line is the twenty-third level of the Tricky difficulty in Lemmings.

As soon as your first Lemming touches the wide yellow brick wall at the right, utilize a Basher! You have no Blockers this time, so plenty of Lemmings will fall into the bottomless pit to the left, but you can't really do anything to prevent this. Once the wall has been broken through, send a Climber to get out of the pit towards the exit. Do not let him enter; instead, apply a Digger skill, then quickly a Builder skill to make him turn back to the left. When he does just that, give him the Miner skill so he can build a tunnel to the other Lemmings stuck in the pit. If your reactions were quick enough, your save percentage should be high enough that even with said casualties, you shall pass this level.

In the Atari Lynx version, it's possible to rescue 100%. Make the first Lemming bash through the stairs. Bash through the yellow wall. Lemmings that are behind the Basher come back and get through that tunnel. Once through, make one Lemming a Climber. When he's almost at the exit, make him a Digger. Let him dig four to seven times and then make him a Builder to make him turn back from the exit. When he does just that, give him the Miner skill so he can build a tunnel to the other 39 Lemmings. If your reactions were quick enough, you'd save 100% of 40 Lemmings.

Because the Original Release Rate is at 50, it's possible to rescue 100%. Make the first Lemming bash at the wall and then dig deep enough to hold the other lemmings. Make the second lemming mine close to the digger to slow him down. Make the digger bash one more time, this time, through the wall. Then it's okay to max out the rate. Let one lemming to build up to the gold floor's edge. You'd save 100%.

Have the first lemming bash through the wall. One or two lemmings will turn around due to hitting the end of the Basher's unfinished tunnel; these cannot be saved. Once the Basher has finished, have it build over the pit to reach the exit. Any lemming that falls in the put must be turned into Climbers while they're heading right. Raise the release rate to 99.