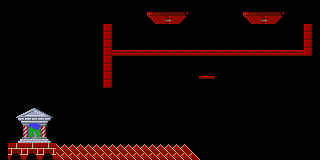 Dolly Dimple is the second level of the Crazy difficulty, featured in Oh No! More Lemmings.

Make a Lemming from the right entrance build towards the wall on the left. The stairs should start at about three bricks from the wall, but don't finish it. We're just starting this early before the crowd gets too chaotic. Make one of the Lemmings facing left a Climber. Once he has reached the top of the wall, wait for him to walk to the edge and start digging.

When done right, this should result in him digging only the left side of the wall. The right side will continue to keep the other Lemmings safe. Once the Climber has dug enough that there's only a few more pixels of the wall left, stop him by making him build. After a few steps, stop the building by making him dig. This should result in a safe path where the other lemmings can fall without splatting. Finish the bridge started earlier to let the others out of the containment area. The Lemmings should then fall safely and walk to the exit.

Have a Lemming heading towards the right build a ramp directly above the smaller platform below. Send a Climber over the wall on the left and have him dig the left-hand side of that wall. This will allow him to get to ground level without dying while also keeping the other Lemmings contained.

Turn the Climber into a Builder against one of the diagonal bricks so that he turns around to the right. Have him build a long ramp towards the small platform below where the other Lemmings are contained. He should hit his head and turn back towards the exit. Once the ramp can safely catch other Lemmings to keep them from falling too high, have one Lemming dig as he's passing under the ramp built earlier (note that he is heading left due to this setup). This will release the contained Lemmings and allow them all to reach the exit.

Retrieved from "https://lemmings.fandom.com/wiki/Dolly_Dimple?oldid=10360"
Community content is available under CC-BY-SA unless otherwise noted.